The Fire That Sparked a Tradition 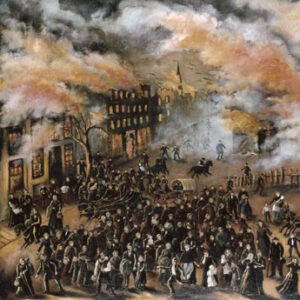 On a balmy evening in October, 1871, Daniel “Pegleg” Sullivan was sitting outside his house enjoying the unusually warm weather. His contentment was suddenly shattered by the site of flames inside the barn of his friends, Patrick and Catherine O’Leary, who lived across the street. Daniel rushed to the barn to help but the fire was already too far advanced and not much could be saved.

The fire, aided by a strong, restless wind, spread at lightning speed through the predominantly wooden structures of greater Chicago. By the following day—October 9—when the fire was finally brought under control by the use of explosives, much of Chicago had been devastated. At least 300 people had perished and some 18,000 buildings were destroyed. Almost one third of Chicago’s population of 300,000 was left homeless.

Understandably, the cause of the fire became the focus of much speculation. The popular theory revolved around Mrs. O’Leary’s much-aligned cow, which was thought to have kicked over a lamp and set the barn on fire. Ironically, the O’Leary house survived the disaster with only minor damage.

Thereafter, on each October 9th, the people of Chicago commemorated the fire with parades and ceremonies. In 1911, The Fire Marshals Association of North America officially declared that date as Fire Prevention Day. Ontario became the first jurisdiction to observe Fire Prevention week during the Sunday through Saturday period in which October 9 falls.

This practice continues to this day in communities throughout North America as a constant reminder that prevention is the ultimate cure.

Have an escape plan in case of a fire, and practice that plan regularly with your family. #firesafety #Ontario https://www.oafc.on.ca/home-escape-plan