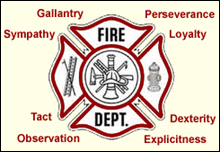 The eight point Maltese Cross is the international symbol of the fire service’s willingness to make great sacrifices in order to protect others from the ravages of fire. The Maltese Cross is a symbol of protection and a badge of honour. Its story is hundreds of years old.

When a courageous band of crusaders known as the knights of St. John fought the Saracens for possession of the holy land, they encountered a new weapon unknown to European warriors. It was a simple, but a horrible device of war; it brought excruciating pain and agonizing death upon the brave fighters for the cross. The Saracen’s weapon was fire.

As the crusaders advanced on the walls of the city, glass bombs containing naphtha struck them. When they became saturated with the highly flammable liquid, the Saracens hurled a flaming torch into their midst. Hundreds of the knights were burned alive; others risked their lives to save their brothers-in-arms from dying painful, fiery deaths.

Thus, these men became our first firemen and the first of a long list of courageous firefighters. Their heroic efforts were recognized by fellow crusaders who awarded each with a badge of honour – a cross, similar to the one worn by firefighters today. Since the Knights of St. John lived for close to four centuries on a little island in the Mediterranean Sea named Malta, the cross came to be known as the Maltese Cross.

The Maltese Cross is the symbol of protection. It means that the firefighter who wears this cross is willing to lay down his life, just as the crusaders sacrificed their lives for their fellow man so many years ago. The Maltese Cross is a firefighters badge of honour signifying that he works in courage – a ladder rung away from death.

Have an escape plan in case of a fire, and practice that plan regularly with your family. #firesafety #Ontario https://www.oafc.on.ca/home-escape-plan