Why are Dalmations Firehouse Dogs?

Here’s the Answer in Black and White 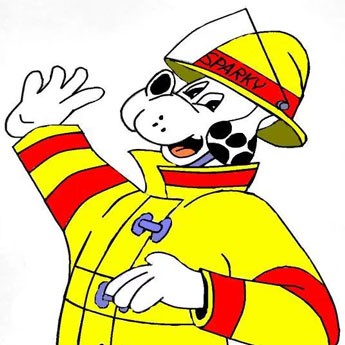 Ever see a fire truck in a parade without a Dalmatian in the seat up front or in the lap of a smiling fireman riding in back? Ever visit a firehouse without having one of those black and white spotted dogs come wagging up to you?

Why is that? Why do Dalmations and firehouses go together like smoke and fire? The answer is interesting, and one you’ll likely recall every time you see the Dalmation/firehouse combo from now on.

It all began in the days of stagecoaches. Horse theft was so common back then that many stagecoach drivers strung a hammock between two stalls at night, then slept behind their horses to guard against thieves.

But, if the driver owned a Dalmatian, he could sleep in the house or the stagecoach hotel. Why? Because it was observed that Dalmatians formed an amazingly tight bond with horses. When they became close as with a team, no stranger would dare lay a hand on them.

Once the knowledge of this trait spread, more coach drivers went to great lengths to get Dalmatians to watch their teams. In fact, this practice became so common that Dalmatians were first called “coach dogs”. They were used by coach drivers centuries ago in England, Scotland and Wales.

“Dalmatians have always gotten along well with horses,” says Esmeralda Treen of Milwaukee, Wisconsin, a recognized authority on the breed. “Horses are gregarious and feel the need for company. You can’t leave them alone too long. Dalmatians take to horses and become ‘companions’. Back in the stagecoach days, the ‘Dals’ would run alongside the coaches, or under the rear axle of the moving coach. They’d keep up with the team as far as it ran, sometimes over 20 or 30 miles a day.

“When the coaches reached the inn, the coachman left the dog to guard the team as well as luggage in the coach,” Esmeralda explains. “IF the coachman stayed to guard, a robber would sometimes distract him in conversation while others pilfered the goods. They couldn’t pull that ruse on the Dal, since they’re very alert dogs.”

When horse numbers grew here in the New World, the number of Dalmatians grew with it for the same reason they were popular in the Old Country. And, since every firehouse back then had a set of fast horses to pull the pumper wagon, it became common for each group of firemen to keep a Dalmatian.

Again, the spotted dogs not only guarded the firehouse horses, they kept them company during their long, boring waits between fires. And, when they took off for a fire, the dog would run alongside the pumper.

The horses are gone from the fire stations today, but the Dalmatians aren’t. The tradition has been carried on, and it may be as much for the looks and appeal of these beautiful dogs as it is for their nostalgic tie to yesteryear.

While all the facts are well founded, there is a common but false rumor that these spotted dogs that breed enthusiasts would like dispelled. It’s that Dalmatians are kept at firehouses because they’re deaf and therefore, the siren does not bother their ears nor make them “spook” like it would other dogs.

“I once heard that on national TV and could not believe my ears,” says Chris Benoit, president of the Chicagoland Dalmatian Club. “It’s true that there is a problem with deafness in the breed, but that story is totally false!”

What is true is that Dalmatians are the fastest growing breed of dog in America today. A relative rarity until recent years, Dals are expected to soar into the top ten soon, right up there with beagles and dachshunds.

Another thing that’s true is that these dogs have spots everywhere–even inside their mouths and on the bottom of their paws! And they’ve become the polka dot darlings of advertising and fashion photographers, who say they like the high contrast of these black and white dogs.

The Dalmation is a strong, muscular, active dog capable of great endurance and considerable speed.”

“Dalmations not only look aristrocratic but behave like gentlemen. Neat and clean, short coated and sensible.”

“They were orignally known as ‘coach dogs’ in England, where they were used as guards for the mail and later accompanied fashionable carriages. In the stables and fire stations of London, the Dalmation proved it was no mere decorative mascot. It destroyed rats and other vermin. Almost inevitably, given its great capacity and almost insatiable desire for exercise, it was invariably turned out with the fire engine and raced with the horses through the streets. During this time thoughout North America, it acquired the nickname ‘The Fire House Dogs.

It’s gentle disposition was attractive to children, horses, and those hardy pioneers who manned the old pumpers. The occupational hazards of those early Firefighters remain, still taking their toll of smoke filled lungs, burned hands, smashed knees, wrenched backs, and heart attacks. The mascot has retired to hearth and home but faithfully carries on as the symbol for fire protection.”